Work on the Village Springs Railroad began in June 2017. It features two MRC Dual Power transformers that power four mainlines and all the accessories.

Most of the motive power and rolling stock is American Flyer, with lots of American Models and S Helper thrown in.

Three of my original American Flyer engines and cars remain in operation on the 15' by 12' platform.

From time to time we will add more photographs when I figure out how to do that in here with the new building system. 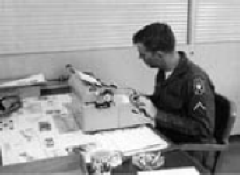 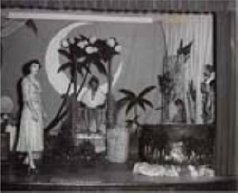 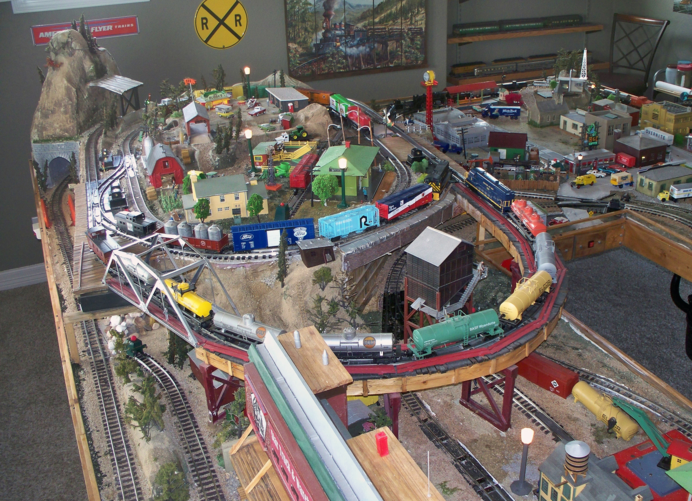 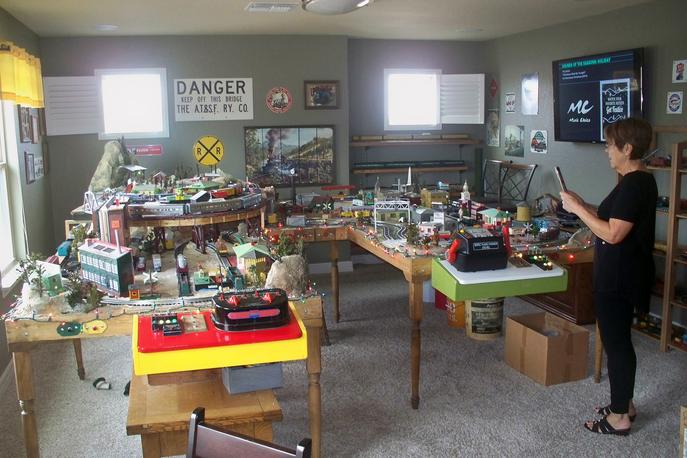 Some ill-informed souls think our nation's military is just about warriors like my retired Force Recon Marine son-in-law who captured bad guys in Baghdad and took care of business in Afghanistan or my son who flew Harriers for VMA 214 - The Black Sheep, buzzing vehicles on Interstate 10 "to show them their tax dollar at work."
But for all their guts and glory jobs, it's the sap like me who types that makes the military really function, keeps the brass happy and types out the passes - so don't mess with the Remington Raiders!

In Glendora, I survived my teen years and learned how to drive. I was a Sig Alert Aug. 13, 1961, in Los Angeles. For those who remember, that's what they called major crashes on our freeways. I also learned a little about love in those days, had my heart broken a few times and got into USC, where I promptly flunked out and spent four more years getting my journalism degree from Fresno State. Being 1A when I graduated, only the Pasadena Star-News would hire me, so I worked as a copy boy for a few months until I got drafted.

Little League played a big part in my early years in Alhambra, CA. I was a good pitcher, but lousy hitter. I broke my pitching thumb my last year which kept me off the All-Star team and ruined my shot at the Bigs. There was more to my years then but boring you isn't my goal here.
Mom and dad made an interesting couple. Here they participate in a community play my dad wrote called "Soused Specific," which spoofed "South Pacific." He wrote it for a housewares convention and was a big hit. It got an A years later at Montana State when I used it for a drama class. Way to go, pop, I made the dean's list because of it.
After 13 years in Alhambra, mom thought she heard a Mexican had moved into town, so we packed up and headed east to Glendora, where I would spend the next 45 years, most of them living next to best friends - the Martinezes, Ybarras and Garcias. I always found that hilariously ironic.

My Army years were uneventful until I got to Phu Bai, Vietnam, where I was assigned to be a cook and bartender in the MACV Press Club's bar and grill. After sustaining an eye injury and was medivaced to the USS Sanctuary, I spent a few months at San Diego Naval Hospital recuperating, then finished off as a battalion clerk at Ft. Lewis, WA, got married, got out and returned to the Star-News. 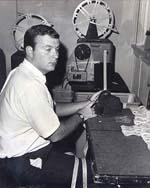 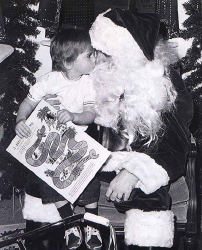 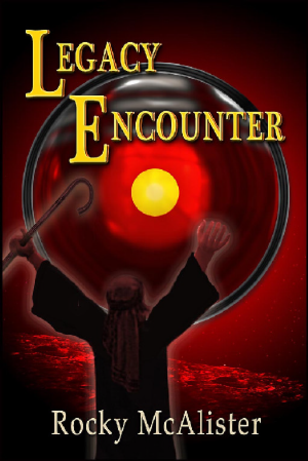 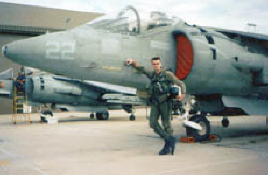 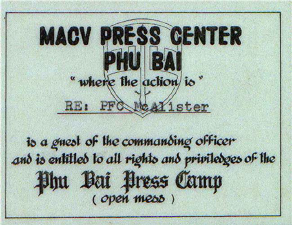 In 1991 I remarried, returned to newspapers with the San Gabriel Valley Tribune (part of the Star News and Whittier Daily News chain). I mostly was a copy and weeklies editor, wrote some features about trains (big ones and model ones) and then was told to leave the same summer my wife got leukemia. I lived in her hospital room at UCLA for the year she fought the disease but it took her in August 2001.
In 2003, I moved to Big Bear, was evacuated due to a fire two weeks after moving in then discovered the joy of blue skies, clean air and shoveling snow six months out of every 12.
But, it was a great place to live and gave me a chance to travel (trains, planes and cruise ships). I've become a Moose, joined the American Legion, VFW and stay involved in this mountain community with the annual MS Walk and Old Miners' Days.
In May 2014, I moved my life to New Braunfels, Texas, to be near my daughter and son - who are armed and dangerous in the Lone Star State - and to be closer to my traveling destinations, now anywhere in America.
My kids never have sat on their hands; my son flew Harriers for the Marines and now works in the oil industry, my son-in-law was a Force Recon Marine until 2012 when he retired and became a greeter at Walmart (that's code for don't ask), my daughter's now an LVN and my daughter-in-law applies her graphic design skills to clients.
Well, that about sums up seven decades, so now I'm turning my attention to writing novels.
You'll see "Legacy Encounter" and "Earth's Last Warrior" here on my site and you can buy them from Amazon or order it from any bookstore - really!
"Welcome to Mars! - A Mercenary Adventure to the Red Planet" is on bookshelves in June 2017. Research was almost a full-time job and a lot of fun, so it took longer to publish than anticipated - yeah, like five years. I moved to Texas in May 2014, whereupon the VA advised me I needed some tune-ups. Long story short: Eight surgeries and a year later, I got back to the book, met the woman of my dreams - Suzanne - and we got married in May 2016. She's my best friend and looks cute in a skirt. She even helped me edit "Welcome to Mars!" and did a bang-up job.

Next on our list is "The Decoder Ring Chronicles," a kid-sized space adventure. I'd predict a publication date, but when you are with the people you love, doing the things you enjoy, time's a hard line I won't be drawing in the sand.

Life's short, and we're making the most of it. 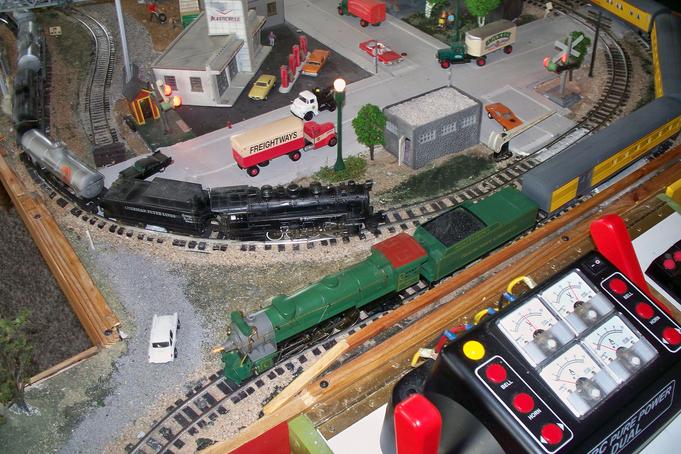 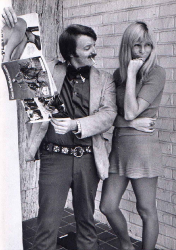 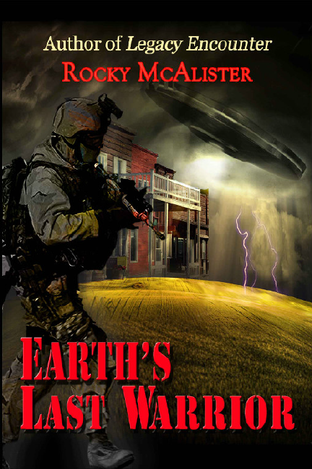 Welcome to my sometimes wacky world.

Here you'll find a little bit about my fanciful journeys -
like interviewing Playmates or impersonating Santa Claus for my son.
(And thanks to Pasadena CA Star News photographer Walt Mancini.)
As is life, this will be a work in progress, salted with bits
of fact and fiction I hope you find interesting.
While you're here, check out "Earth's Last Warrior" and "Legacy Encounter."

And while I've got your attention, check out "Welcome to Mars!" 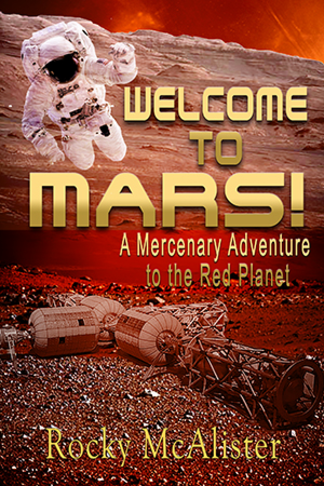 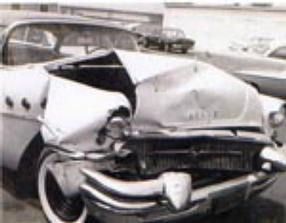 I worked as a police reporter, education editor, feature writer, copy and production editor until 1975 where I took my craft to the Pasadena Police Department and became "The Voice" of the Rose Parade and Rose Bowl Game as far as policing and traffic conditions were concerned. A salary dispute led to me leaving them in 1982, then I was plans and operations director for the Army-Navy Game in the Rose Bowl, worked the 1984 Olympic Games as a senior transportation manager, did some executive recruiting, got divorced and then tried real estate when the first market crash occurred. And all the while my son and daughter were growing up and moving on to their own lives.