The End of the World
Is Here
- Duck and
Cover!

Somebody’s vaporized Earth’s population, and now they’re back to loot the planet.
But they made one mistake: They missed Jack Kincaid, USMC.
He tossed back the last of his Tennessee whisky and grabbed his rifle.
“What the hell . . . it’s a good day to die.” 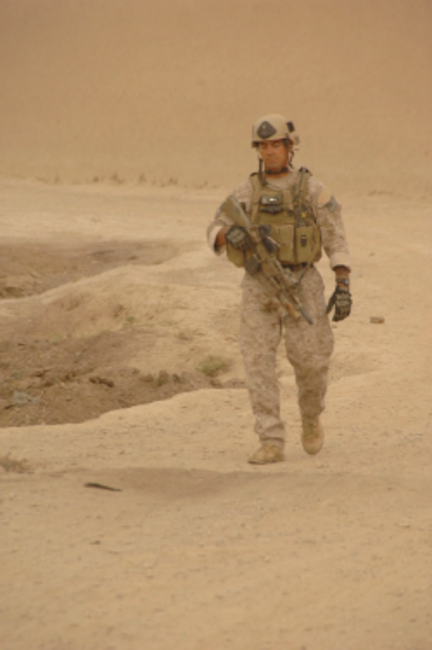 A woman was slumped next to Kincaid, the only person he had seen since The End and she had tried to put a bullet through his brain – twice; most disconcerting, and why had she rummaged in his glove compartment anyway?
“Well, least I’m not alone anymore.” His spirits lifted when that reality sank in. “And I won’t have to talk to myself anymore.”

*****
Her hair was a darkish matted mass that had not seen shampoo in a long time, but then her face also could use a serious scrubbing, he concluded selfishly. After giving her throat a grip to test for a pulse, he pulled off her Reeboks, foul-smelling tennis socks, shucked her crusty blue Nike jacket and took it all out to the trash. He returned to the bedroom with her pack and set it on the nightstand.
He thought to take off her gritty jeans and even dirtier Harley-Davidson T-shirt, but decided he did not want to see her any more pissed off than she already seemed to be, so he just pulled the sheet up.
“Well,” he sighed, staring at the woman snoring fitfully, “get some rest . . . and don’t wake up shooting, all right?”

Jack Kincaid’s left hand swept the gun before she could complete centering it on his chest – and continued upward to crack the side of her throat; she went down hard, hands clutching her neck and gasping for breath. The Les Baer 1911 Boss .45 clunked to the rug and he scooped it up, tucked it angrily in his waistband and bent to the woman.

“If you’ll stop trying to shoot me, I’ll get you something to eat. How does coffee sound? Irish Crème with a hint of Colombian. Grind the beans myself.” She did not move.
“Have it your way.” He sipped at his coffee and made an unnecessary sigh of satisfaction to see if it would annoy her to some sort of awake. It did not – and that annoyed him.
He stared over his mug. “Abigail Elizabeth Pickering of New York.” He pronounced it crisply, savoring each word, and it sounded good to say another person’s name aloud in the house, even if she was muddy, cuffed and intent on putting a bullet in him.
The Marine set his mug on the table and crossed to his new friend – or prisoner, depending how the next few minutes unfolded. He slipped his hands under her arms and hefted her to her feet. She gave up being limp then and stood, staring him dead in the eyes – and he figured if she had had half a chance, dead is what he would be.
“Let’s get a few things straight. I’m not your ex-husband, your ex-boyfriend, your ex-lover, your ex-boss or your ex-anything . . . and have never laid eyes on you in my life.”
Her eyebrows went up at that, and he filed that away while he forged ahead. “Until three years ago, most of my time was spent deployed so we have no history that would cause you to whack me.” He took a deep breath. “By the way, I was going to apologize for that stupid trick with the trailer, but I figure we’re pretty even now.”
He slipped a knife from his back pocket, and she eyed him suspiciously. “When I cut you free, just drink your coffee and try to think happy thoughts. Okay?”
There was no smile on her bruised face. “He’ll find me and he’ll kill me.”

Move over Clive Cussler, Dave Brown, James Rollins and Jack Du Brul -- Rocky McAlister is muscling up to the Hemingway Bar with his non-stop action thriller EARTH'S LAST WARRIOR.  Fellow gangsters, rascals and scamps (and fine ladies, too), when you are looking for your next shot of macho, this is just the perfect read for you.  Rocky's hero Jack Kincaid has all the right moves and the military gear for action, combined with a soft side for a pretty girl.  Too bad for Kincaid, 99.9% of the humans on earth have been dustified, and he has to figure out if the sorry lot remaining are worth saving.  Enter devastatingly beautiful and fierce ex-newsgal Abby Rose and he's got his answer.  Jack Kincaid, USMC easily out-guns and out-lists Dirk Pitt at his best, and I recommend EARTH'S LAST WARRIOR as a Macho Five Star and Five Fingers of Fine Single Malt Scotch read. 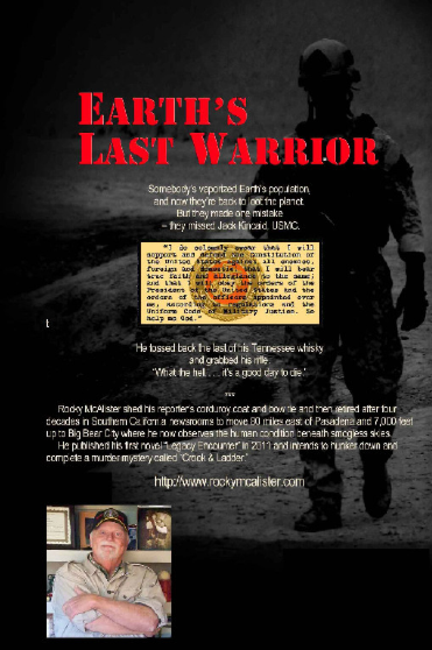 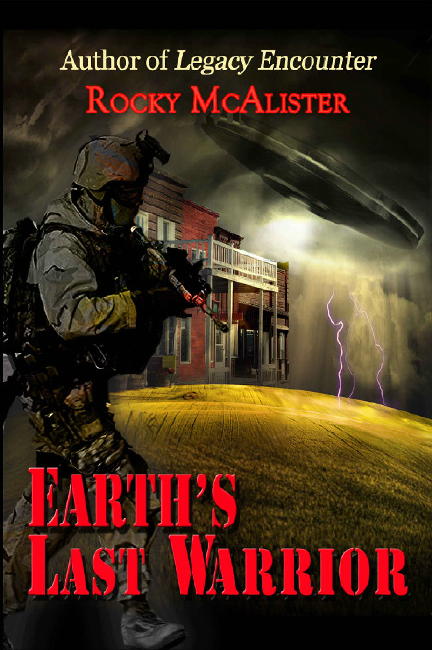